WTF: Free Coffee with Every Robbery 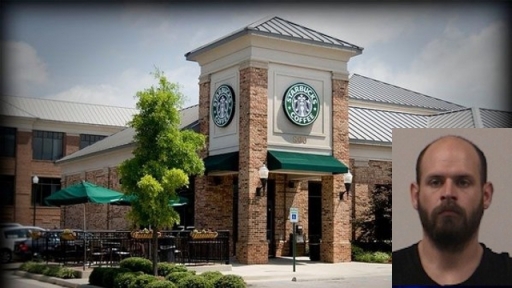 A Tennessee man didn’t get the cash he was after when he walked into a Huntsville, Alabama, Starbucks with the intention of robbing it, but he didn’t leave empty-handed either.

Police say that Sunday’s bizarre robbery attempt went down at 7:30 AM when Phillip Sawdey walked into the Starbucks.

Sawdey demanded money from the barista behind the counter. His plan to grab the cash and run were screwed up when the barista informed him that she was unable to open the cash register (other reports say that she refused to open the register) & instead offered him “a cup of coffee” instead.

Sawdey took his quick defeat well & took her up on the offer, accepting the beverage before leaving the store. He was caught by police in the parking lot & arrested for robbery without incident and booked into the Madison County Jail.

Coffee isn’t the only item some robbers have accepted in lieu of cash. One man allegedly accepted weed instead of money during a robbery attempt in 2011, according to the Corpus Christi Caller Times. And a worker at a Whataburger in Tulsa, Oklahoma, thwarted a machete-wielding robber by offering him fries, according to a 2010 report from the Tulsa World.

I have just ONE question, is Starbucks’ coffee that good (and expensive)?
I hope that was the best damn coffee he’s EVER had in his life, that’s all I’m saying.

Adhedonia: Comes from the Greek word ‘Hedone‘, meaning pleasure. Adhedonia is the inability to experience pleasure.

Not being able to find satisfaction, or reward in anything. Losing interest in everything because its just lost its punch. Pleasurable experiences drive us to strive for more. Sure we can survive with very few pleasure experiences to draw from, but we need something to fuel us.

When you observe someone giving up & avoiding things, it’s because their mantra is out of focus & they now think, “What’s the point?”. Even things that usually give them joy like music, dancing, writing, laying in bed or sex don’t quite connect with them or fill them like it once did. Sometimes people go to extremes to feel something because the usual just isn’t cutting it while their mood is dampened & numbed by whatever is weighing them down. “Stimulation Seekers” push the limits past the norm in order to feel even an iota of what they would usually feel.

I sometimes feel like I’ve been sleeping through my life, missing out on things. I’m beginning to think that my bouts of Insomnia are linked to anxiety caused by the urge to do something instead of just waiting. “Making something happen instead of just letting it happen.”, seems to be my new mantra these days & I think it’s affecting both my waking & sleeping. I’ve got to plan, I’ve got to look out, I can’t relax until this, that & the other thing are DONE. I don’t flip out or anything, but when I’m wide awake & all I can do is sit back, look out & think to myself, it makes me hunger to actually be doing something because things are moving along too slowly, I’m not moving fast enough & at the same time I tell myself, “I can’t do everything. Not right now, pick one thing and move on from there.”

I’m still trying to figure out what motivates me to do the things I do (for myself & others). My passions are changing & so are my goals. I’m not trying to change “who I am”, I just want to be sure of something before I do it, so that when it is finished, I will be satisfied not only with my actions, but with the end result.

Belief & reality are seldom perfectly matched. What you think is sometimes a better predictor of your future performance than any measure of your skill or capacity. Disclaimer: That being said, no amount of self-confidence can produce success when the necessary skills just aren’t there at all (just saying, it had to be said).

One thing is for sure, my love of writing & artwork is getting me through some of these dark days. Things naturally always look better after I’ve written & read through my own thoughts. Even without input or comparison from someone else, I feel better knowing that I can identify or at the very least question something freely.

I think I’ll continue reading “Identity Crisis“, I haven’t read that in ages & then I’ll get back to my search.

Oh, and I’m drinking coffee for the first time in 2 months. I really don’t drink this stuff often & I know that I ONLY do it when I’m really out of it, or when I’m about to do a lot of work. Can’t wait!

Come on say it with me, “Double Double Tuesdays”, now say “Double Double Mondays”.
Monday has a hard “Mm” sound to it, like it’s an angry dictator, or like you’re questioning it, “Mmm-on-days?….. Nah!”

What the Starbucks Trenta Means for the Coffee World 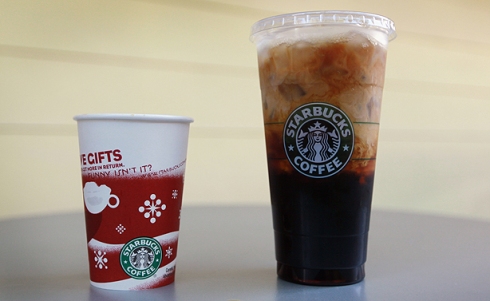 Few things make a coffee man shudder like the notion of a mega 31-ounce coffee. If indeed there exists a shark to jump in the coffee world, the new Trenta is the great white. In fact, the more imaginative me envisions a large black dorsal fin mounted to the coffee chain’s monster sippy-lid and a leather-clad Arthur Fonzarelli water-skiing toward it on two large stir sticks. And I don’t even dislike Starbucks or the Fonz.

Along the path of perpetually improving quality, the escape route of family-size beverages isn’t one that delivers anyone to perfection. If you’re paying for a Starbucks coffee, perfection should be expected. What went wrong with those people at the green mermaid? Instead of striving for coffee nirvana — a goal they once set for themselves — they now opt for cheap beans from places like southern China and then hawk the brew in Costco-sized containers to a public that must (one hopes) see the foolishness in ingesting this kind of volume.

In the coffee world, love them or not, Starbucks was once cool. They single-handedly blazed a new trail for the rest of us in the craft to follow. This one, however — the Trenta — will find few followers, I’m afraid. I won’t be one. Instead, tonight I’ll drink a cool 40-ounce malt beer, eat at an all-you-can-eat shrimp-and-salad bar, and mourn the loss of cool in a once-visionary company.

What the Starbucks Trenta Means for the Coffee World.